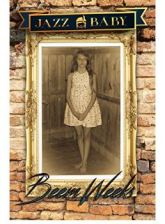 I have just finished reading Jazz Baby by Beem Weeks, but first a teaser from Beem on Amazon’s website.

‘While all of Mississippi bakes in the scorching summer of 1925, sudden orphan-hood wraps its icy embrace around Emily Ann “Baby” Teegarten, a pretty young teen.

Taken in by an aunt bent on ridding herself of this unexpected burden, Baby Teegarten plots her escape using the only means at her disposal: a voice that brings church ladies to righteous tears, and makes both angels and devils take notice. “I’m going to New York City to sing jazz,” she brags to anybody who’ll listen. But the Big Apple–well, it’s an awful long way from that dry patch of earth she’d always called home.

So when the smoky stages of New Orleans speakeasies give a whistle, offering all sorts of shortcuts, Emily Ann soon learns it’s the whorehouses and opium dens that can sidetrack a girl and dim a spotlight…and knowing the wrong people can snuff it out.

For being the first book written by Weeks, I must say that the structure of this book is excellent. The narrative is crafted well and the characters are unique in that the setting isn’t one that a person would usually read for this era. Since it takes place in the roaring 20’s, I would say this is a historical fiction book even though the narrator is a teenage girl.  The pace is nice and fast.

A poor young girl, Emily Ann Teegarten (Baby Teegarteen) has just started puberty when she suddenly loses her father in the first chapter, and her mother is suspected of killing him, leaving Emily Ann an orphan. She ends up under the care of her aunt Frannie and a friend of her father, Tanyon  Thibbedeaux. Emily Ann must navigate and sing jazz in an adult world of speakeasies, crude talk, flappers and depravity.

Emily Ann narrates this story in an adult language and world, yet she just started puberty which contradicts each other. She is an innocent young teenager who is thrust into a foreign world of such depravity that is the opposite of what her life had been prior. She went from singing church hymns and being raised on a farm with no plumbing, to a life of jazz, filled with adults, sexual depravity, intense, erotic, and other adventures at such a young age of 13. Emily Ann speaks of these happenings in a manner that really a young teenager wouldn’t or shouldn’t be narrating.

Having known many who have been sexually abused at young ages, this part of Jazz Baby was a real turnoff for me. She discovers how to use her sexuality at age 13, and for me this just isn’t right. I’m not a prude, but still, this was a turn off for me. Tanyon started off by helping Emily Ann, and then he betrays her to save himself, after which Emily Ann was abused in every way possible. Many things happen and I won’t give away any spoilers, but Emily Ann does come into her own, and for that I was grateful.  I rate this book as four stars.

One thought on “Review of Jazz Baby by Beem Weeks”

poetry brought to you through film, television and music

tell your stories, love your life

The latest news on WordPress.com and the WordPress community.