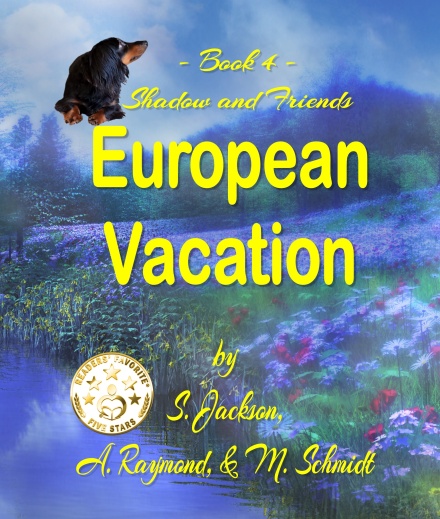 In Shadow and Friends European Vacation, a small dog named Shadow wins a free trip to Europe because of all of her books that teach children safety at home, and during adventures. Shadow is allowed to take five friends with her on this fabulous trip, and she chooses to take five squirrel friends. In this delightful and funny book for children, safety is taught through the hilarious antics of her friends. Throughout this story of teaching children about historical areas and places in Europe, squirrel antics keep children entertained, and safety is learned. Targeted at ages 4-11, this book is easy to read and perfect for home or classroom. This story illustrates a few of Europe’s fascinating features with illustrations for children and adults.

“Shadow and Friends European Vacation is the fourth book in the Shadow and Friends series written by S. Jackson and A. Raymond. As a reward for all her hard work in publishing books which teach safety to children, a small dog named Shadow wins a trip to Europe, not only for herself but also for five of her closest friends. With her favorite squirrel friends (Stubby, Foxy, Big Whitey, Little Whitey and Pilot) in tow, Shadow arrives at Heathrow Airport, London, before touring the city on a double-decker bus. A tour of The Tower of London and Big Ben are both on the agenda, as are Stonehenge, The Eiffel Tower and more. After visiting the UK, France, Germany, Italy, and the Vatican City, and learning special facts about the animals and tourist attractions in each country, Shadow and his friends board a plane and make their way back to the United States, excited to have learned so much during their European journey.

S. Jackson and A. Raymond have produced an educational children’s book filled with fun facts about some of the different countries in Europe. Red squirrels are introduced as newcomers amongst the squirrel family, as well as teaching the reader about their habitat and characteristics. The mischievous, yet entertaining antics of the squirrels when they visit each of the incredible European landmarks add a wonderful humorous element, making the learning process enjoyable while teaching the reader right from wrong regarding local customs when visiting another country. Shadow and Friends European Vacation is the perfect recipe to give any child the urge to travel to new places and read about the flora and fauna in areas which are different to their own. Reading about a foreigner’s view of Europe was enlightening and I recommend Shadow and Friends’ European Vacation to children between the ages of 7 and 12, who love to learn fun facts about nature and foreign lands.”

“Hilarious indeed! A short story about historical sites and tourist attractions in and around Europe as seen through the eyes of a small dog named Shadow and his five squirrel friends. Shadow and his friends are not unlike typical kids excited about seeing something new and different for the first time. I liked how the authors moved the plot along quickly from one visit to the next. The authors use a unique approach to teaching a history lesson. Teaching through the voice of a dog and squirrel has the potential to hold children attention better than just story lines from humans. I would have liked to have seen more colors in the pictures and perhaps larger pictures. This storybook is ideal for elementary age students.” ~ Verified Purchase

Follow When Angels Fly on WordPress.com
A Life Given To Me

"The bliss of writing is seeing you smile."

Discover ©SK's 🆆🅴🅴🅺🅻🆈 🅵🅻🅰🆂🅷 🆂🅰🅻🅴🆂 on our Site | We offer unique graphics and artwork designs on T-shirts, Apparel, Mugs, Bags, Posters & Prints and much more gifts for Whole the family, our T-shirts are available in a huge variety of styles, sizes, colors and designs for all kinds of occasions.

Writing Stories of Love, Faith and Happy Endings While Enjoying the Journey