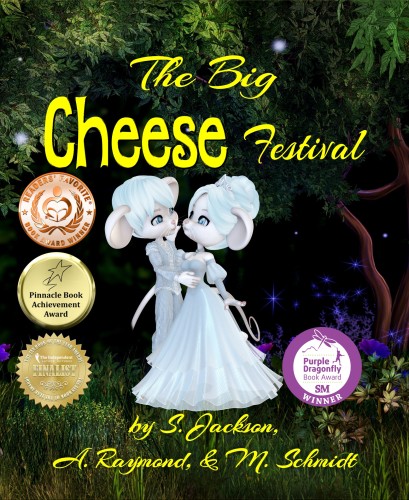 In The Big Cheese Festival, we meet Stubby Mouse and his family and friends. We learn that Stubby Mouse has a secret, that he is being bullied by another mouse, simply because his tail is short. Read how Stubby Mouse stood up for himself, and how he ended the bullying, in this delightful story for children. Targeted at ages 4-8, the book is easy to read and perfect for home or classroom. Children learn how bad bullying is, and what they can do to help stop bullies! Stubby Mouse encourages children to take a stand against bullies, and always be kind to each other. This story illustrates how everyone is different and unique, and it is a delightful read with cute illustrations for both children and adults. Take a stand against bullying today!

The Big Cheese Festival is a children’s educational picture book written and designed by S. Jackson with A. Raymond. Stubby Mouse was happy and excited when he woke up on the morning of the Big Cheese Festival. All the mice in his neighborhood looked forward to this big event. There would be dancing and lots of cheese, and they would elect a King and Queen of the Festival. This would be Stubby’s first Big Cheese Festival, but something happened to spoil his happiness and sense of anticipation. When Cutter Mouse came to pick up Stubby’s brother, Zippy, he made fun of Stubby’s short tail. Cutter laughed and said that no girls would want to dance with him. Zippy got angry with his friend for picking on his little brother, but the damage was done. After Zippy and Cutter left, Stubby began to cry. Cindy heard him crying inside the house, and she wanted to know what was wrong. She liked Stubby just as he was, and thought Cutter was an awful bully. They would go to the festival together, and she’d love to dance with Stubby.

S. Jackson and A. Raymond’s educational picture book for children, The Big Cheese Festival, addresses the problem of bullying and the pain children can experience when they’re victimized by bullies. This story shows how being different is not a bad thing or something to feel ashamed about. Stubby may only have half a tail, but he ends up with an amazing thing happening to him. He also gets to dance with the bully’s girlfriend. The Big Cheese Festival has gorgeous graphics that bring the woodland setting and its characters to life. Jackson and Raymond address an important issue, and they do so in an enchanting tale that’s a perfect choice for story time. Adults should consider using this tale as a springboard for discussions about bullying in school and in the playground. It’s also a good starter primer for new readers as it has large print and an easy-to-follow story. The Big Cheese Festival is highly recommended.

“There are issues that plague all children as they grow up. Each child struggles with identifying who they are as a person, how they relate to other people and how to find out what they believe in. Children can be cruel to each other while they learn how to navigate the messy world of emotions. This can come out in the form of bullying. In The Big Cheese Festival the authors explore the concept of bullying and how it can impact the life of another. What may seem like funny and harmless words to one can truly hurt another. We’ve got a fantastical world of anthropomorphic mice, one of whom only has half a tail. He is named Stubby and due to the unkind bullying from his brother’s friend worries about whether or not he’ll find any worth in himself.

Bullying is a big issue to tackle. Some children’s books try to address this and drop the ball completely. Jackson and Raymond have bundled up the idea of bullying in their book. They take an obvious difference, like having half of a tail, and use it to illustrate how others might react to something so clearly different from the norm. It’s a cute book with the little mice getting ready for a festival. Cutter Mouse, who is friends with Stubby’s brother, is the perpetrator of the bullying. It is often someone close to the bullied who begins the abuse, which Jackson and Raymond have captured here.” ~ Hungry Monster, Feb 2017

“The Big Cheese Festival” is a must read book for those with children of all ages, even though it is geared towards ages 4–11. Children learn what bullying is, and how to take a stand to stop bullies. This story is perfect for home, schools, and libraries, as it is so important that children be taught, and learn, kindness towards others no matter how different someone is to them. Jackson has cleverly used both boy and girl mice, in a manner that gets the point across while keeping children captivated. I highly recommend this charming book. ~ Susan Vance, “Leaving Savannah.”

There was an error retrieving images from Instagram. An attempt will be remade in a few minutes.

Grab a Band-Aid & Keep on Crafting!!

a place for poetic-ish ramblings on life, love and happiness ♡

Blog It Up
boy with a hat

writing as a way of life

Into the Light Adventures

how to make money online

The home of all things books

Maybe happiness is not what i want