Writing your first novel-Things you should know 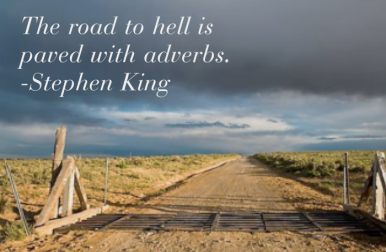 I do a lot of critiques for different writers during the week. Some of the writers are very polished; others, not so much.

The one thing I’ve noticed in all levels, is an abundance of adverbs. I must admit, I get jealous at how prettified some of those sentences read. I can’t write like that. My brain isn’t wired that way.

According to William Noble, many inexperienced writers, and I will add unpublished- but have been around the block a few times writers, throw in “pretty” words(adverbs or adjectives) to make their prose more dramatic and meaningful. These cosmetic touch-ups often turn out to be  redundant or simply uninspiring.

Adverbs bog down your story without adding meaning.

He zoomed around the oval speedily.-Is it possible to zoom without speeding?

He stutteredhaltingly.-Can you stutter without doing it haltingly?

poetry brought to you through film, television and music

tell your stories, love your life

The latest news on WordPress.com and the WordPress community.