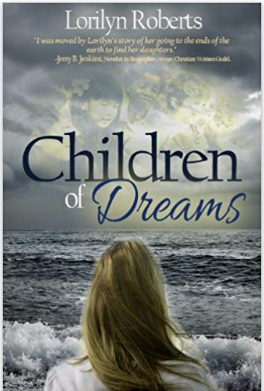 My review of Children of Dreams by Lorilyn Roberts (I met this author at the Reader’s Favorite Book Awards November 2019).

“Lorilyn Roberts’ hopes of motherhood came to a devastating end when her husband left her for his pregnant girlfriend. Eight years later, Children of Dreams reveals God’s restoration of her dreams through the international adoption of her two daughters. Written as creative nonfiction, an analogy is drawn between the physical adoption of children and God’s spiritual adoption as recounted in the Bible. Ms. Roberts skillfully weaves in her own back‑story while telling about her adventures in Nepal and Vietnam, filled with political intrigue.

Scriptural insights and reflections interspersed throughout the book show Lorilyn’s reliance upon her heavenly Father when all hope seemed lost. The reader will enjoy the vivid descriptions as well as a window into the plight of those struggling to survive where basic necessities may not be available. The adventure includes meeting a future Prime Minister, a missing baby, and many other surprises.

The medical mystery in Children of Dreams was featured on Animal Planet’s “Monsters Inside Me,” in the episode of “Shapeshifters.”

Ms. Roberts’ appearance on the show was to inform adopting families about certain medical conditions endemic in developing countries.”

I read this book with full concentration on each detail as revealed by the author. This is Christian book and bible verses are found throughout. Robert’s takes us through the adoption process of two foreign countries and the United States (when adopting a foreign child).

The story is true and a memoir. Dialogue is lacking, the descriptions of her adopted children’s birth and origin countries and usage of the word “depravity” grabbed me, as depravity is about a person or persons and not a third world country. Descriptions of Nepal and Vietnam are detailed through the author’s eyes only, and it was, for the greater part, a culture unto itself, but not depravity, try poverty. Culture will be highly important to both kids when they are older.

Raising both daughters as Christian is wonderful, writing about the foreign countries beliefs in a derogatory way is not. I hope she teaches her children about their origin countries in a favorable way for those involved. I’m Christian, I respect God, I believe God intervened for both adoptions in a miraculous way for sure. Robert’s is “on point” in this aspect and I love that!! God loves all of his lambs, and that includes people in third world countries, Christian or not. I believe if you put down a cultures belief system, you put down God. For instance, I have a friend in Canada who has many children, three of whom come from a royal line in the middle east. She is Jewish and Christian, and she strongly values her children in knowing their cultural backgrounds such as the one from Singapore, another from India, a couple from Greece and the rest of Israel origin. She has 18 children, four that were adopted. All the children learn ancestral culture and language, they are immersed in the Jewish faith and Christianity, but they also are taught their heritage. It would be nice for Hope and Joy to know theirs. Granted, my friend has more money than she can ever spend, and so classes being taught are easier for her. I pray that Robert’s helps her daughters to learn of the origin culture.

Robert’s faith was tested, tested, and tested again, over and over, and she was able to go back to God and give Him her worries, and she was rewarded for doing so. God is good, and Robert’s gives Him His true glory. No mistake in this aspect. For a single woman to adopt two girls from two foreign countries is amazing and I have to hand to the author to do so. I rate this book as FIVE stars.

"The bliss of writing is seeing you smile."